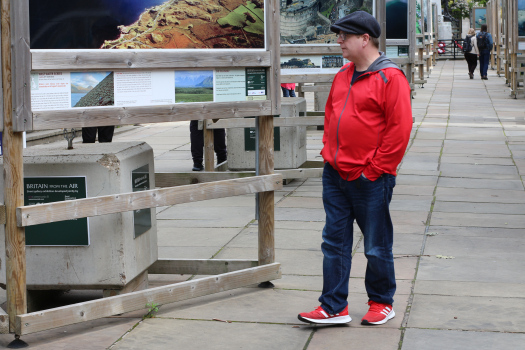 "I find it hard to believe it's less than three years since I first met Mark Connors at a local poetry event. Since then he has become a lynchpin of the Yorkshire spoken word scene, not only in running the ever-popular Word Club in Leeds, but I also found him totally reliable as a rousing stand-in compère when I was in charge of Harrogate's poetry and prose evening. Every time I see him, Mark has had another of his vividly expressive poems published somewhere or other. Do I need to mention that he is a master of the 140 character "Twiction" form, using it to snatch the coveted Ilkley Literature Festival Open Mic prize from under my own nose last year? At the other end of the prose scale he has even written two novels, and I've no doubt that they will turn out to be brilliant. Goddammit - some people are just too clever!"
Tim Ellis

Hank Mullins wakes to silence. Hank is not used to silence. Even the goddamn birds have stopped singin'. There's no potterin' or sizzlin' comin' from the kitchen. There's no hissin' from the bathroom, that sound of sharp summer rain he'd heard every mornin' for as long as he could remember. There's no hollerin' from his daughter: "Where the hell are my shoes, Momma?" There's no scratchin' of Bronco's paws on the old wood floors. No huffin' or a pantin'. Nothin'.

The only sound is Hank's laboured breathin' after too many cigarettes and too many whiskies at Cal's Bar last night.

He props up his pillows like his wife Bobby Jean had done every night before readin' one of her romances. Goddamn those romances, thought Hank. It was them that put them fancy ideas in her head. It was them that got her wantin' more than Hank had to give.

He's lost his wife, his daughter, hell, even his goddamn dog. But Hank still has his pride. But pride doesn't sell country songs. Hank picks up his guitar and pretends his pride has gone south too.