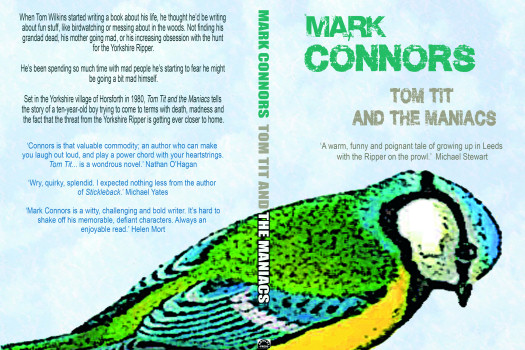 After the police got the tape, they put up big signs all over Leeds and Bradford, like banks or supermarkets do. The sign said: HELP US STOP THE RIPPER FROM KILLING AGAIN in big black letters. Underneath on the left side it said: LOOK AT HIS HANDWRITING and there was some of the Ripper's handwriting in a box. Next to it, the sign said: LISTEN TO HIS VOICE. There was a telephone number. It was 0532 464111. I wrote it down in my first bird spotting book that Mum bought me for my birthday last year.

One day, I was over at Shaun's house and we rang the number and listened to the Ripper. He said:

I'm Jack. I see you are still having no luck catching me. I have the greatest respect for you, George, but lord, you are no nearer to catching me now than four years ago when I started.

Then Shaun heard his mum coming in from the garden so we put the phone down.

Tom Tit and the Maniacs

When Tom Wilkins started writing a book about his life, he thought he'd be writing about fun stuff, like bird-watching or messing about in the woods, not finding his grandad dead, his mother going mad or his increasing obsession with the hunt for the Yorkshire Ripper. And he's been spending so much time with mad people he's starting to fear he might be going a bit mad himself.

Set in the Yorkshire village of Horsforth in 1980, Tom Tit and the Maniacs tells the story of a ten-year-old boy trying to come to terms with death, madness and the fact that the threat from The Yorkshire Ripper is getting ever closer to home.

Connors is that valuable commodity: an author who can simultaneously make you laugh out loud, and play a power-chord with your heartstrings. 'Tom Tit...' is a wondrous novel about that twilight time between childhood and adolescence, when a strange world is viewed through eyes that are no longer truly innocent.
Nathan O'Hagan, Obliterati Press.

Tom is ten. His granddad has just died. His mum is going mad. And he's got a shit pair of binoculars. A warm, funny and poignant tale of growing up in Leeds with the Ripper on the prowl.
Michael Stewart, author of Ill Will.

Wry, quirky, splendid. I expected nothing less from the author of Stickleback.
Michael Yates

Mark Connors is a witty, challenging and bold writer. It's hard to shake off his memorable, defiant characters. Always an enjoyable read.
Helen Mort